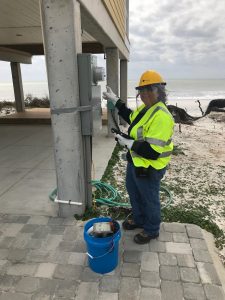 Me in all my safety gear. FR shirt and pants, ankle high composite toe work boots, safety glasses, safety helmet with full face shield, electric rated rubber gloves with leather gloves on top of them. When the temps get over the mid 70’s it gets pretty hot in all this gear, and when the face shield goes down everything steams up.

Just 5 weeks ago I wrote about a new venture I was embarking on. I saw a job opportunity pop up on Workamper News for a field technician working for Southern Cross, who had a new contract starting up with Duke Energy. The job entailed exchanging older electric meters (mostly on residences) for their newer smart meters. These new smart meters relay information straight to the electric company without having to send out someone to the residence to read the meter. Also from what I understand the electric company can turn off the electric without sending someone out to the site to physically do it. On line you can find plenty of bad stuff about these meters. Duke and Southern Cross promise that these are not true. I don’t really know if any of it is or not, and that’s not really where I want to go with this. On February 18 I showed up for training. 6 RVers and 34 others based out of Tallahassee. We had 2 weeks of training at a warehouse in the Tallahassee area. Most of the second week it seemed we were just waiting on supplies for the job. As I said, this was a brand new contract. We were waiting on FR (fire resistant) clothing, a few tools, a truck for each of us, and handheld tablets that were to show us where to go and record everything about the meter exchange. So finally by the third week most of us had the equipment we needed and we started with small groups working on real meter exchanges in the Mexico Beach, Florida area. We quickly moved a little south to Port Saint Joe and Cape San Blas because Mexico Beach is still reeling from being hit so bad by Hurricane Michael last October. My first semi-solo meter exchange (an experienced person was there to check my work) was on a small lighthouse. I thought that was pretty cool. 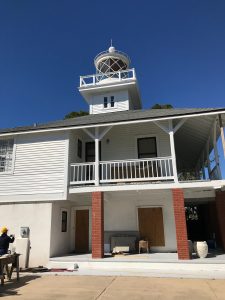 Starting on Thursday that first week in the field we were on our own, but we could call our supervisor if we had any problems or issues. I found there were for me some challenges with this. Some of the meters were set kind of high, and being short I didn’t have much leverage in pulling them out. And between corrosion from the salt air, and other factors, some meters were a bear to get out, and that usually meant the new one would be hard to get in. And the meter boxes themselves were rusted or painted by the homeowner and that made it very hard to open and close the boxes. And once you opened the box you couldn’t just leave it unless you had it closed and a seal put on it.

I walked around this beautiful house looking for the meter. The house is on stilts, and I was looking high and low for it. I finally saw the nicely built closet with a little peep hole showing the meter display. Open the closet door and ta da there is the meter!

You don’t want to see this in a meter box. It is melted wires. I had to report this one.

These two meters had a big shrub in front of it, The meter box even had a bird’s nest in it (image on the right, bird nest on upper left). It was quite a challenge to reach through the bush and change the meters. Then I had the hardest time putting the meter box covers back on because of the rust and corrosion.

So with the physical challenges, and also with what I saw as some problems with management on the project, I decided by last Monday I needed to start looking for something else. Before this opportunity had come along, I had been focusing my job hunting to the area of Hot Springs, Arkansas. I’ve never been there but I know that within an hour of the town there are quartz mines and Crater of Diamonds State Park where you can hunt for diamonds. I had not had any luck. No one had posted any job opportunities in that area on Workamper News or on WorkatKOA.com. Well, on Monday a job posted on Workamper News for work at Catherine’s Landing in Hot Springs. They were advertising for couples so of course I just sat down and attached my resume to a cover letter written with some humor on why they would benefit on hiring a solo workamper. For those of you not in the know, a lot of campgrounds hire a couple before a solo due to the fact that they get two workers and only have to give up one site for them to stay on. And I understand the reasoning behind that, but I really wanted to work there. So on Tuesday the manager of Catherine’s Landing called, saying that the letter made him laugh. We chatted for quite awhile, and he said he needed to find out if he could hire a solo. On Wednesday he called back and offered me the job. I worked through Friday at the meter install job, and I will depart Monday for Hot Springs. This week has sure been a whirlwind of a week.

So before I depart this area, I am adding some pictures I have taken of the area. I won’t post any of the destruction in Mexico Beach, as I think it is depressing, and instead I am posting fun photos.

When we first got to Mexico Beach Amos and I went to the beach. As you can see by the second photo he does not like the water.

These three photos are taken in Port Saint Joe which is just down the road from Mexico Beach. The left photo is of the Cape San Blas Lighthouse. The image in the middle cracks me up. Someone has added eyes to this downed tree because it looks like a sea monster.

I have not seen a Piggly Wiggly grocery store in many years. There is one in Port Saint Joe, and they had some cute T-shirts. The 2 pink shots are front and back of one.

These were taken in Apalachicola. I walked around town and visited some shops. The first two were at a bicycle repair shop. The chalkboard was in front of a bar. I love the jeep. There is a sea turtle peeking through the front grill.

I also visited St. George Island. It was a bit too chilly for a beach day so I climbed the lighthouse to get a bird’s eye view. The second photo is to the south, the third is to the north, and the fourth is to the east, with the bridge to the mainland. I got rewarded with a sticker.

So, you never know how fast things can change. My next post will be from Hot Springs!

8 Replies to “From Meters to Hot Springs”