The definition of workamping is working while living full time in an RV. It can be working at a physical place or working remotely on the computer. Working for someone or working for yourself.  I have worked several places since I hit the road in October 2015.  My favorite thing about having to work while I am a full time RV’r is all the awesome people I have met while working. I have left each place with new friends, many of which I know I will meet up with again. And that is one of the best parts of this lifestyle. Sometimes meet ups with these friends are planned in advance when you know where each of you are traveling, and sometimes it is just pure luck when you run into each other again.

Right before I was to leave my last job at the KOA in Mount Pleasant South Carolina I was looking at campground arrivals and I said to myself “Hey self, you know these people!” I was happy to see Jim and Diana Belisle were going to stop at my campground the day before I was to leave. They are history buffs and write a great blog. Click on their names to check out their blog, ExploRVistas.com. I knew they were heading north up the coast but hadn’t known their itinerary. I first met them while working at Amazon during the fall of 2016. Then they had stopped in to see me for a quick visit last summer at the Mount Rushmore KOA. When they arrived in Mount Pleasant they helped me get my car on the tow dolly and then we went out for a delicious pizza dinner. While we chatted and caught up I found out they were going to be staying at my next campground (North New York/Newburgh KOA) for a whole week in May!

So now here it is in May, I am settling into my new digs, and here come Jim and Diana. The week they were here we planned on doing something on my days off. On Tuesday, we went to the nearby town of New Paltz, which is a college town and has some very cool shops. Our afternoon was cut short when the alarms on our phones went off. There were tornado warnings in the area. We went back to the campground to hunker down for the storm. While the weather was very scary, and nearby there were some tornados that touched down, the campground fared very well. Many places had lots of trees down and power outages were all over. We lost cable at the campground but luckily the power never failed.

The next day the weather was better, not a sunny day but the rain was pretty much gone. We packed a lunch and set out. Our first destination would be Minnewaska State Park Preserve, only about a half an hour away. The road headed uphill and there was a pretty overlook.

At the overlook there was a sign that had other local attractions and we noticed a large garden gnome, more on that in a few minutes.Once we were in the park we took a short hike to the bottom of Awosting Falls. The falls were pretty and drop about 65 feet. 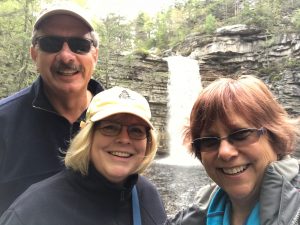 Then after a quick lunch in the car (the gnats were too annoying to eat outside), we went over to Lake Minnewaska. There is a 2 mile hike around the mountain lake but rain was threatening so we only went as far as an old house that was built on the rocks above the lake. It was in disrepair but it looked like it might have been under some kind of refurbishing. This was the view from the house. 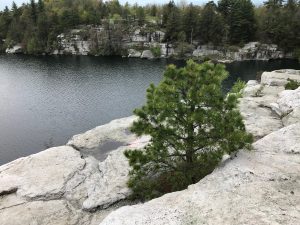 After that we decided to investigate the big garden gnome in nearby Kerhonkson. We were first met outside of town by a State Police traffic check. We don’t know who they were looking for but whoever it was wasn’t from Florida. When stopped the trooper asked where we were from and when the answer from Jim and Diana was Florida, they flagged us on. After making a wrong turn and then doing a U turn back through the traffic stop, we arrived at Kelder’s Farm. 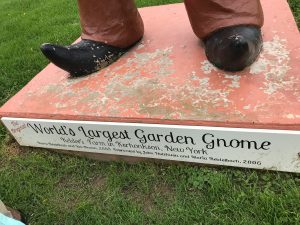 Taken from the awesome Roadside America’s website: “The 13.5-foot-tall “Gnome Chomsky” was the world’s largest when he was built in 2006 by New York City artist Maria Reidelbach. He was later topped by an 18-foot-tall gnome in Poland and a 15-footer in Iowa”. 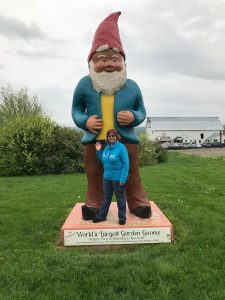 Kelder’s Farm was home to more than just the big gnome. It also hosted a farm store, a bounce pillow, miniature golf, and a little petting farm. It all overlooked their beautiful fertile farmland. 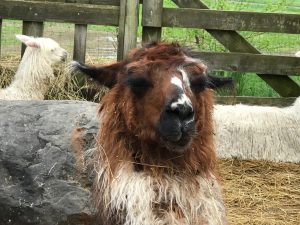 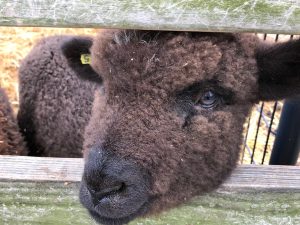 I bet this place is quite the spot to stop during the summer, especially with the folks that have kids.

So after all of this we stopped on the way back to the campground at Tuthilltown Distillery. My friend and former coworker Wilson had worked up here and really liked their products. For $10 you could try 5 of their liquors. I tried an apple vodka, their 2 bourbons, a rye and a whiskey. We also shared some of our tastes so we could try a few more. They have a real yummy coffee liquor and a cocoa. Not as sweet as liqueurs, which was kind of nice. Their triple sec is really good too. Wilson loves their gin. I will have to take his work on this as it is probably the only liquor that I don’t  drink. Our pourer was really nice and knew what she was talking about. But as this place is a small distillery, you have to pay small batch prices. We didn’t buy anything on our visit, but I will probably bring my best friend Shirley when she comes to visit at the end of June.

A great day was had by all, and until our paths cross again Diana and Jim, happy trails and safe travel!